Village Roadshow Pictures and Flynn Picture Company in association with Vinson Films are in pre-production on the New Line Cinema action-adventure disaster feature film “San Andreas: 3D”. Auditions for lead and supporting roles will be taking place in Los Angeles, CA where filming is set to get underway in April, 2014. The stand-ins for the film’s starring actors will be cast closer to the start of shooting. The extras will be cast throughout production in Los Angeles and other various locations in California. The film is scheduled to hit theaters on June 5, 2015 and will be released in 2D and 3D. This project has been in development since 2011. 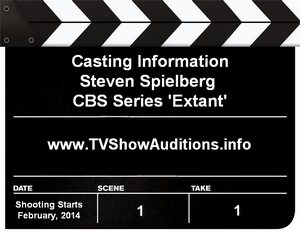 Amblin Television and Energy Entertainment are gearing up to begin production on the new futuristic sci-fi thriller CBS television series “Extant”, produced by Steven Spielberg and starring Halle Berry as the central character. The show’s award winning casting director has sent out casting calls and will be holding auditions in Los Angeles for series regulars. Additional casting for possible recurring and guest starring roles will be taking place. The extras will be hired beginning in February, 2014 when shooting begins in Los Angeles.

Lucasfilm, an owned subsidiary of The Walt Disney Company, in association with Bad Robot Productions, Genre Films, and Kasdan Pictures are in pre-production on the highly anticipated epic feature film “Star Wars: Episode VII”. Despite the recent change in writers, shooting will still commence on January 21, 2014. Casting calls have been issued and auditions are taking place for starring and co-starring roles. The primary filming locations will be at Pinewood Studios in the UK, with additional shooting in New Mexico, and in Los Angeles. J.J. Abrams has constructed production facilities at his Bad Robot Santa Monica headquarters specifically for Star Wars: Episode VII. The extras will be cast throughout production in London and New Mexico. Film crew resumes can be submitted via email to the production office.

With the announcement that Academy Award nominee Josh Brolin is in negotiations for a lead role in “Jurassic World”, casting is now officially in high gear. Ebb Tide Films and Amblin Entertainment are in pre-production on the fourth installment of the Universal Pictures extremely popular and successful science fiction adventure Jurassic Park film series. Current casting is taking place in Los Angeles, however there will be additional casting in the filming locations of Baton Rouge, LA and also in Hawaii. Interior shots will be filmed in sound stages at Raleigh Studios in Baton Rouge, while exterior filming will take place on the island of Kauai in Hawaii.

Charlie Hunnam has dropped out of “Fifty Shades of Grey” due to his busy TV schedule.
Creative Commons

Michael De Luca Productions and Focus Features in association with Trigger Street Productions are in pre-production on the feature film “Fifty Shades of Grey”, which is based on the hugely popular best-selling novel of the same name by British author E. L. James. Universal Pictures announced on Saturday October 12, 2013 that actor Charlie Hunnam has dropped out of the lead role of Christian Grey due to his extremely busy television schedule not allowing him sufficient time to prepare for the lead role in “Fifty Shades of Grey”. The Primetime Emmy Award winning casting director is now seeking a new actor to play the lead role of Christian Grey. Dakota Johnson has previously been cast in the role of Anastasia Steele.

Redboard Productions and The Linson Company are in pre-production on the upcoming HBO series pilot “The Money”, and the Primetime Emmy Award nominated casting director has sent out casting calls for series regulars, possible recurring roles, guest stars, and day players. Shooting will get underway in New York City on October 5, 2013. The general extras, featured background actors, stand-ins, and photo-doubles will be cast throughout production.

Details Here:
HBO Casting Calls for “The Money” in New York
by alanbaltes

Disney Channel and Moose Toys are teaming up to find two kids to be official Toy Reviewers. Casting producers are conducting a national talent search in Australia looking for two kids between 8 and 16 years of age to star in their toy reviews on-air! The kids selected will receive a 14 month paid contract which includes payments of $200 per production shoot. The audition process consists of kids uploading a homemade video to the official Disney Channel website for the talent search.

Duncan Jones has been brought on board to direct “Warcraft”.
Creative Commons

Atlas Entertainment and Legendary Pictures in association with Blizzard Entertainment and Liberty Films are in pre-production on the Warner Bros. Pictures epic fantasy adventure feature film “Warcraft”, which is now scheduled to begin shooting in Vancouver on January 13, 2014. This film is based on the franchise of video games and novels by Blizzard Entertainment. The twelve-time Casting Society of America Artios Award nominated casting director for the film will begin auditioning talent for lead roles, and subsequently supporting roles. The extras for the movie will be cast throughout production in Vancouver.